Adnan Siddiqui And Humayun Saeed Team Up With Ertugrul Producer

The Pakistani Entertainment Industry is all set to take friendship with Turkey to a whole new level with their latest collaboration. Renowned actors Adnan Siddiqui and Humayun Saeed have partnered with Tekdin Films and TRT production for a new project. The former has produced the hugely popular Turkish historical TV drama Dirilis Ertugrul (Ertugrul’s Resurrection) which has been all the rage in Pakistan since PTV began airing a dubbed version.

“Dr Kashaf Ansari and Mr. Kamal Tekdin have formed a new production that will infuse freshness in Pakistani content. He asked me and my friend and colleague Humayun Saeed to come on board and here we are!” revealed Adnan Siddiqui. Further Humayun mentioned that “We are at the helm of affairs of Tekdin-TRT partnership which means all the work that is to be done in Pakistan-pre and post-production including casting, will be done through us.” On being asked what would the new alliance mean for the native entertainment industry, Adnan, who has not let borders constrain his work, said, “Art should not be a slave to international boundaries and political agendas. It should be allowed to flow freely and prosper”. 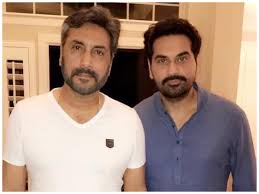 According to sources, both Pakistani and Turkish actors will be part of the project that Adnan and Humayun will be co-producing along with Tekdin Films and TRT production.